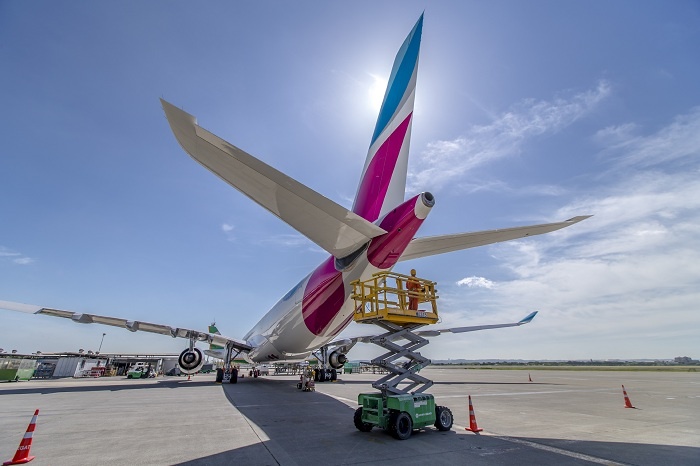 Eurowings is stepping up its commitment in Berlin and will open a new base at Berlin Brandenburg Airport (BER) on April 1st.

The carrier had already emphasised the importance of the capital at the launch of the new airport in October and announced its intention to strengthen its position in Berlin.

Now the airline is stationing three of its Airbus A320 aircraft at the new BER.

For decades, the Lufthansa Group has reliably connected Berlin with Europe’s most important metropolises as well as long-haul destinations via Lufthansa’s major hubs in Frankfurt and Munich.

In the meantime, the airlines of the Lufthansa Group have significantly expanded their market leadership at BER.

With the opening of its base, Eurowings is also reacting to the withdrawal of international competitors who have largely left the German market in the wake of the crisis.

“Others are leaving, we are staying here,” said Eurowings chief executive, Jens Bischof.

Since the capital’s new airport opened in October, Eurowings has already taken off from Berlin more than 1,000 times.

In February, every third BER departure was a Eurowings flight.

Bischof describes BER and Eurowings as a “perfect match”.

He added: “Berlin is and will remain an absolute tourist magnet and one of the most exciting metropolises in Europe, both culturally and historically.

“We are very pleased to soon be able to fly residents of Berlin and Brandenburg to their well-deserved vacation after the end of the lockdown.”

At the same time, the leisure carrier is entering the British travel market in response to the surge in demand for flights between the UK and Mallorca.

The holiday airline has an international base on Majorca and, for the first time in its history, will connect Manchester and Birmingham with the popular Mediterranean island from the end of May.

Entering the British travel market, Eurowings will initially fly holiday travellers twice a week from Birmingham as well as from Manchester to Mallorca and back.

A further expansion of UK flights by Eurowings will be considered in the coming weeks.