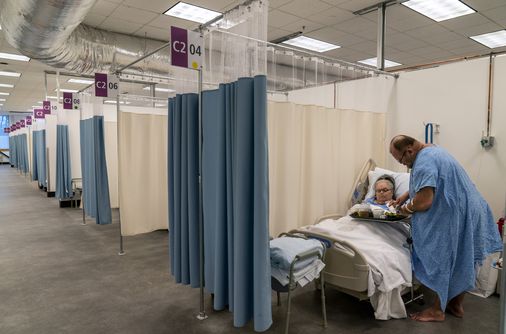 “We do not want there to be any confusion,” said Marino. “Neighborhood continues to cover 100 percent of any costs associated with COVID-19 testing, vaccination and treatment.”

The company said that there has been no expense to members for testing or vaccination, and the health plan has also recently expanded its telemedicine coverage to include phone-only with no prior authorization or cost-sharing fees and has allowed for early prescription refills. Dawn Ratté, a spokeswoman for the health plan said these expanded benefits are in place for all health plans, which include Medicaid eligible children, adults and families; Medicare-Medicaid dual-eligible adults; and individuals, families and small businesses who purchased their health insurance through HealthSource RI, which is the state’s health insurance exchange.

The state’s largest health insurer, Blue Cross Blue Shield of Rhode Island, is taking a different approach. It sent an email to its members recently saying its no-cost coverage of treatment for COVID-19 — including emergency services, inpatient services, and provider office visits — will end on March 31. Cost-sharing associated with testing and vaccination will still be waived.

The health insurer, which serves more than 415,000 members, did not issue a press release about the policy change, which was first reported by WPRI-TV. When a Globe reporter requested a copy of the member email, a BCBSRI spokesperson said they did not have it.

Neighborhood Health began waiving all members’ out-of-pocket fees – including copays, deductibles and co-insurance – for treatment related to COVID-19 in March 2020. Blue Cross Blue Shield announced a similar policy on April 3, 2020, saying it was “for the duration of the pandemic.”

On Friday, BCBSRI released a statement saying the free-coverage policy was supposed to expire at the end of 2020, and was extended to March 31, 2021. “More recently, a year into the pandemic, with vaccines becoming more widely available, we felt it was appropriate to let the cost sharing waiver expire as had been planned,” the statement read.

Gail Carvelli, a spokeswoman for BCBSRI, said the company will still cover COVID-19 treatment, but will no longer waive the out-of-pocket costs or cost sharing, including co-payments and deductibles, for those treatments.

When asked why the health plan was ending their free coverage policy at the end of March, Carvelli said it was due to the “growing availability of vaccines.”

While the COVID-19 vaccines prevent severe illness, hospitalizations, and death due to the virus, the vaccines do not necessarily prevent people from getting infected or becoming ill, which means that some Rhode Islanders may still have to seek treatment in the future, even if they are vaccinated. The one-shot Johnson & Johnson vaccine, which the state is expecting to use to vaccinate some of its homebound population and other at-risk groups, is just 66 percent effective overall at preventing moderate to severe cases of COVID-19, STAT reported in January.

While President Joe Biden has urged states to make all adults eligible for the COVID-19 vaccine by May 1, and Governor Dan McKee on Thursday announced that he planned to make all Rhode Islanders who were 16 and older eligible for the vaccine on April 19 — more than two weeks after BCBSRI’s cut-off date for no-cost treatment. Also Thursday, state health director Dr. Nicole Alexander-Scott said that only 12 percent of Rhode Islanders were fully vaccinated against the virus.

In its statement, BCBSRI said its coverage for COVID-19 treatment is “consistent” with other health insurers in Rhode Island, and nationally.

Cory King, a spokesman for the Office of the Health Insurance Commissioner in Rhode Island, told the Globe Friday that Commissioner Patrick Tigue spoke with BCBSRI leadership and is exploring all of his options to address their decision. He said Tigue would be talking with leadership at each commercial health insurance company.

Governor Dan J. McKee told the Globe in a statement sent by his office that BCBSRI has been a good partner with the state, but that he was concerned by their announcement on reinstating cost-sharing for COVID-19 treatment as the pandemic continues. He said he believes that commercial health insurers operating in the state should waive cost-sharing through the end of the public health emergency.

In a statement emailed to the Globe, Tigue said he was concerned with BCBSRI’s announcement to reinstate cost-sharing for COVID-19 in April.

“It is a priority of Governor McKee and I to ensure that Rhode Islanders are protected from the harm that COVID-19 presents to their health and financial wellbeing,” said Tigue.